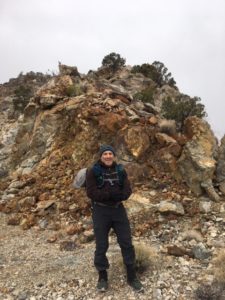 11,000 feet of vertical rise?!? In one hike?!? That’s right, Telescope Peak in Death Valley National Park. The standard route starts from a parking lot at 8,000’ but if you want a real challenge you can begin at Badwater Basin 200’ below sea level. So that’s what we decided to do

Looking at the logistics of it, it’s a hard one to figure out. If you do it in the summer you’ll start off with Death Valley temperatures well over 100F. If you attempt it in the winter, the start is nice but the upper section is usually windy with temperatures close to 0F. We were making our attempt in January and were going to be facing some cold temps. We would need to carry layers and a bivy option and be prepared for some suffering.

Our day began at 4:30am in the Badwater Basin with lots of food and water and ice axes and spikes in our packs. Eight miles of following the dirt road on the alluvial fan brought us to the first turnoff through a wide canyon finding our way while following a stream through rocky terrain and sometimes through thick river scrub.

At the end of this section we began following an old mining road up a steep grade along beautiful exposed ridges. High winds, blowing snow and big drop offs raised our anxiety but checking our supplies and time we decided to press on until there was a real reason to turn around. 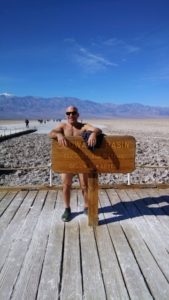 At mile 13 we began looking at the summit, the amount of distance we had already covered and the route ahead. We were at 6,000’, had another 5000’ to go, a smaller summit between us and the final climb and only four miles to go. Something wasn’t making sense. Even with a steep climb there wasn’t enough distance to make that kind of gain. Double checking our maps and GPS we realized we were off route. Continuing along this route was not a viable option to the summit. It was time to turn around.

Where did we go wrong? Picking our way through the valley we were happy to see the mining road and couldn’t resist the pull of the path of least resistance. Instead of the road we should have continued in the valley to a gulley that lead up the summit! It was a long day with a lot of climbing and we barely made it halfway up. I knew it was going to be a big challenge and it was even more than I expected. I would need to train more, go in with larger expectations and stay on route. I have no doubt I’ll give it another go.