Dubois, WY – In the mid-1990s, I spent a few weeks mountaineering in Wyoming’s Wind River Range and was amazed by the range’s beauty, enhanced dramatically by its rugged remoteness. While there are no 14,000’ peaks in the Winds, it is considered one of the wildest, most heavily glaciated ranges in the continental United States. A few years later, I began running ultra-distance events and was particularly fond of running in wild places with minimal support. That’s when the idea began to form: an unsupported solo run over the spine of the Wind River Range.

Some loose planning ensued and the adventure seemed somewhat daunting. While the planned route would be about 45 miles, not very long by ultra standards, there were many factors to consider. The primary concern was safety. This is real wilderness, with dangerous terrain, glaciers and snowy passes to cross, intense weather patterns, grizzly bears, and to top it off (and why I call it “real wilderness”) very few people and a good chance that if I did get injured I’d be on my own for a substantial amount of time. While these were concerns, they were also the reasons I wanted to go there. Without waxing philosophical, wilderness travel, at least to me, assumes that you are ready to take care of yourself and not rely on outside help. With this in mind, I’d need to be prepared for various situations should they arise. 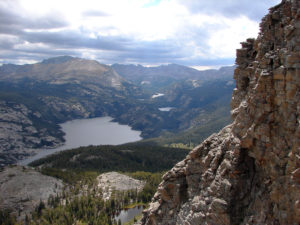 It turned out to be a classic case of the balance between weight and speed. I could run with a lightweight pack, taking minimal gear, covering the distance quickly, and hoping that nothing serious would happen, or I could carry more gear for the sake of safety, which in turn would slow me down and put me out there longer. While I did not want this to become a two day fast-packing trip, I opted to pack based on a single question. If I got injured or caught in a storm, could I hunker down above treeline in nasty weather and spend the night?

As 2010 dawned, I added the Wind River Crossing to my list of adventures and started talking about it to some buddies. The interest was incredible, and while I initially wanted to try this as a solo endeavor, the idea of a small team crossing sounded more fun, and as an added bonus there would be safety in numbers. While there were some excellent runners interested in the adventure, I was hesitant to invite anyone who was not a seasoned ultra-runner. A DNF here would be a very bad idea. In the end, Josh Fuller, Nate Willson and I made up the “WRC10” team. Meeting multiple times over beers and maps, our plans began to solidify. We would attempt the crossing in that small window between frequent, intense storms and the beginning of snowfall, which meant mid-August. We estimated that if everything went smoothly, it would take us between 13 and 15 hours to get to the other side. We also had a crew of two that would shuttle the cars to the opposite trailhead and be ready to alert search and rescue should we not appear in 24 hours.

While the planned route had plenty of water sources, we had to decide if and how we would treat the water. We opted for lightweight filters that could be added to our Camelbak reservoirs, so we could scoop and go. Food selection took a little more thought. We would need to carry lots of calories, both for the run itself and some in reserve just in case we had to hunker down. Other special items we carried included: Kahtoola Microspikes to help us cross the potentially icy Dinwoody Glacier and Bonney Pass; a mylar bivy sack, which would act as an ultralight shelter; rain gear; and an insulated jacket, hat and gloves. That’s not the entire list of gear by any means. Our packs turned out to be quite heavy. (We never weighed them, so don’t know their actual weight. Besides that would have made us discard something we may have needed.) Thinking about pack weight and snow travel, we also added collapsible trekking poles to our list. Now we were ready to go!

After months of planning (and associated beer drinking), we left Laramie, WY on August 27th for the five hour drive to Dubois. There was plenty of excitement and laughter, validating my choice to do this as a team. As we drove through Lander, we saw that the range was immersed in a mass of dark clouds. Continuing our drive north, a violent lightening storm raged all around us. When we finally pulled into camp near the next morning’s start, the storm had mostly abated. I was sure that this was the standard Wyoming high-country storm that would pass through and leave the morning crisp and clear. As we crawled into our sleeping bags, alarms set for a 3am wake-up, the storm returned and continued through much of the night. Things were looking grim. At 3am we crawled out of the tents and looked up, way up, toward the first mountain we’d cross. Dark clouds sat there. A discussion ensued about what we should do. After months of planning, our Achilles heel was that we didn’t have a weather plan. Anyone who plans an expedition into the mountains has a weather plan! How did we miss that?!? We determined that it was too dangerous to commit to the crossing with the current weather pattern. The best option would have been to hang out in camp for the day and try again the next morning, but we didn’t give ourselves those extra days. The Wind River Crossing was bagged. 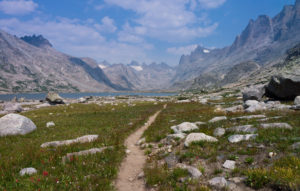 We did end up having a great 20 mile mountain run on Saturday, and another 10 mile run the next day, with an exploratory mission to the Wind River Brewing Company in between, so not all was lost. While we were sitting on the patio of the brewpub in Pinedale, watching the storm rage in the mountains, we knew we had made the smart decision. And we also pulled out the maps and lists, and start planning on our 2011 Wind River Crossing. We’ll have lots of weather days planned this time.