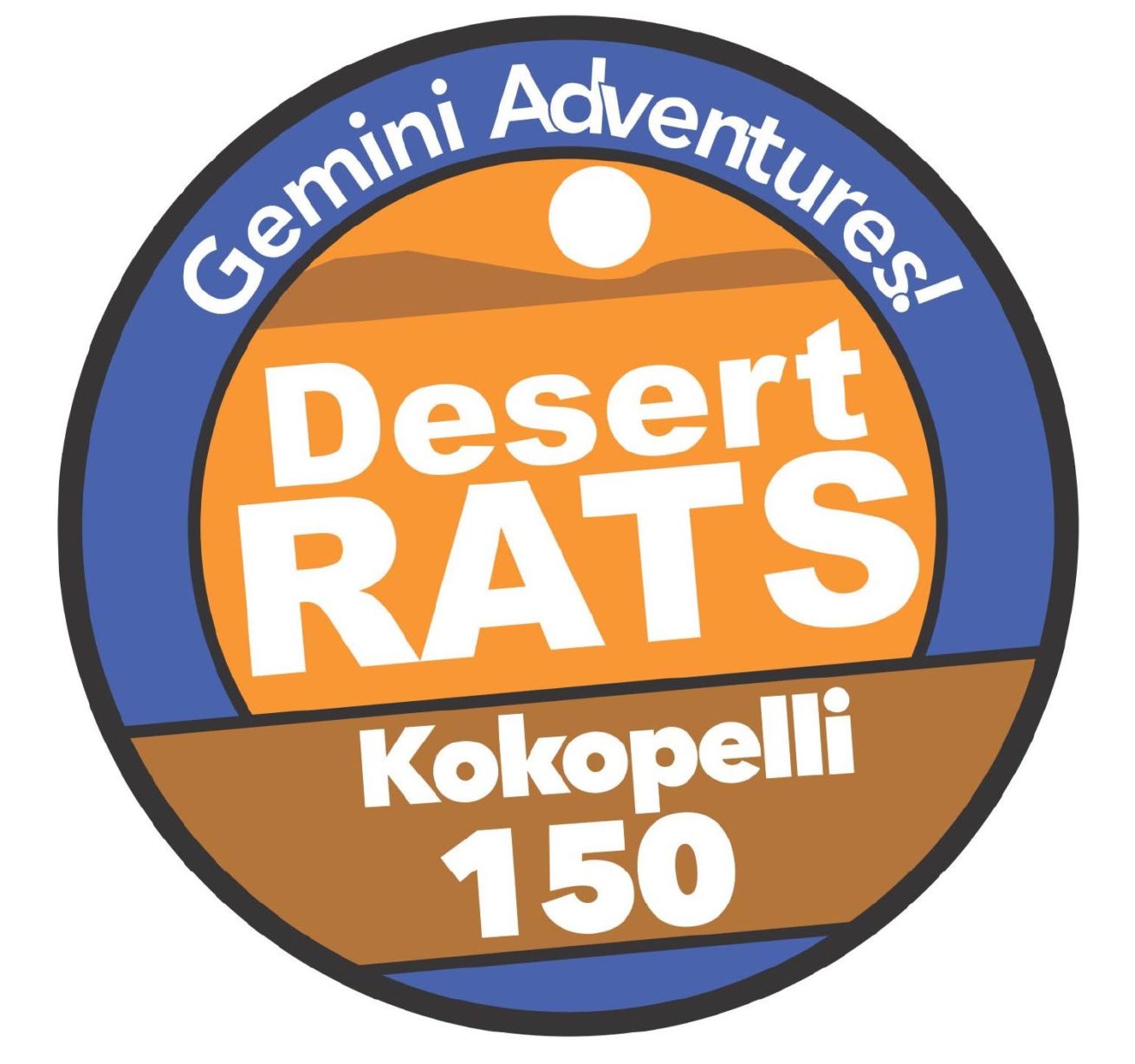 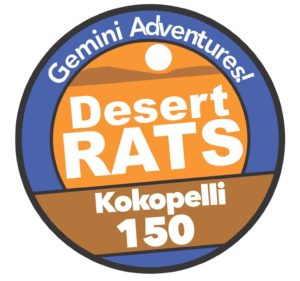 Live Tracking – We’re working with Adventure Enablers to offer 2019 racers optional cell tracking for the race. The goal is near-real time tracking for every stage but it is not 100% guaranteed. Please don’t be concerned if there are lags or drops in coverage. The tracking will catch up!

Evening storms at camp delayed our racer posting. Check out day 2 for the recap so far!

CHRIS WARD- The last two days have been awesome! The weather has been pretty cool, but not as cool as Phil Pinti’s day two shorts. I’m really enjoying the course and hanging with everyone at camp. To Lindsey, thanks for letting me head out into the desert for year of this adventure. You mean the absolute world to me! To Millie, Zoe and Harper, thinking of you will always get me through any low moments I may have out here. Love my Ward girls very much!

[Editor’s note: people get wacky in the desert. Enjoy.] There’s a Zord On Me: Colonel Mustard, in the dining room, with a knife. Obviously. Colonel Mustard is a gentleman, he’s not about to eat his bratwurst in the drawing room like a moron. How do you think he got to be a Colonel? And of course he uses a knife. He’s not a footsoldier. He’s Colonel. He doesn’t mess around with basic yellow mustard in a squeezy bottle.

PHIL PINTI: Day one was fun, day 2 was too. These folks… (runners, Gemini Adventures Staff, race voluteers) are unparrelled at any race, anywhere.
The comraderie and community at camp is the thing we wake for, and then the thing we run for. Perfect strangers… running for our own reasons… and yet willing to give another the water from our packs or the shirt off our back. This year’s group is smaller and we are fully bonded by day 2. It’s exciting to witness other runner’s achievements and see folks push beyond their comfort zones. If you wanna do hard things… you gotta do hard things… Keep On Keeping On.

ULLA WESTERMANN: Happy Birthday to my wonderful daughter Sadie! A quarter century! You’re awesome! Love you! Been thinking about you all day while running. I’m always awestruck when I come back here how beautiful it is. Running along the canyon rim enjoying the views while trying not to trip, amazing rock formation, and everytime you turn a corner there is another beautiful view! We’ve been very luck with the weather: not as hot, some clouds, and even a sprinkle of rain.

PAUL SCHEURING: The expectation going into the race was the same expectation this race meets with every year: take the Utah desert, add a healthy and unrelenting dose of summer sun, and one can expect to be running through something akin to a pizza oven for 6 days. But Nature as always is a cagey lady; these first two days have seen rain, wind, lightning, and impossibly, runners complaining at aid stations about being *cold*. The storm cell that hit us last night at camp came so ferociously that I half expected our tents to be borne up in the winds and end up, after a certain amount of hours lost in the clouds and perhaps briefly confused for UFOs by NORAD, in Colorado. Being a Californian, lightning is a rarity at best for me; to see it strobing relentlessly around us last night was a treat…until the medical staff called the racers into a hasty meeting to detail the wide-ranging effects of being struck by lightning. Amongst other things, one’s ear drums get blown out, apparently. So we had that to look forward to. The arcs of lightning got so close that we repaired to the vehicles–rubber tires, etc–and waited it out. Being the same Californian I was earlier in this piece, I confess to being quite thrilled. Could it be, possibly, that we could be struck in the very vehicle I was sitting in? Would that be a cool thing? Or would we just feel a hot buzz in the air, the bolt of lightning more interested in bypassing us than barbecuing us, disappearing into the desert soil beneath our wheels? Would everything flash white around us
with nothing more than our collective hair being blown out porcupine-style? Alas, we were not hit by lightning. Tomorrow the heat returns, so in some sense to race returns to its more recognizable form. I guess the only thing I’m holding out for at this point is the forecast for Thursday, our long day, the icon for which is neither a sun, nor a cloud, nor rain or lightning. But instead what appears to be a wind gust. So will we have high winds, the sort that might bear up our tents as hoped and deposit them in Colorado, thereby forcing us to sleep under the stars and appreciate their infinite beauty? We can only hope. All will be revealed Thursday.

KAYLA HOWELL: Day 1 started a little fast but I was able to hold on to Race Lead after running out of water on the Monster Hill. Such a great crew to run & camp with. Lots of laughs and a little bit of unfortunate puking. Two miles to the finish was extremely tough….mentally. Hearing the entire staff and other runners cheering you on from a distance helped me pick up the pace for a strong finish. Stage 2 I started out feeling surprisingly fantastic. At about mile 14.5 my knee took a turn for the worst. A previous knee injury caused the opposite knee/IT band to compensate. Cory with the medical team wrapped my knee with an Ace Bandage and I was able to run
to the next aid station. Camaraderie and support from other runners pushed me to an even stronger finish. Amazing weather, and light rain included! The food has been over the top. No one eats this well camping, trail running, and especially in the desert! Thank you, Howard!!! Looking forward to tomorrow.

MORGAN HALL: Stage 3 was a lot of fun. Mostly because it was shorter and the trail changed frequently. We started on pavement and then on to dirt road and then hiking trails. The fast day gave a chance to get ready for tomorrow’s big stage. After the race we went swimming in the Colorado River and rested. Things are going well and the experience has been wonderful.

PHIL PINTI: Every day has unforeseen obstacles. . . stuff is gonna happen. It’s not the things that happen to us, that we should concern ourselves with,
it’s what we do with what we’ve be given that counts. Day three was a blast, camp is really starting to mojo-nate, these folks are family.
To Penelope & Nolan, I Love You to the moon and back, and I’ll see ya soon!!

KAYLA HOWELL: Stage 3 was a super slow start after some knee pain the day prior. Paul kept me company and we had tons of laughs for the next 11ish miles. They
started ringing the cowbells too early which meant we had to run faster for longer than anticipated. Watermelon with lime & sea salt greated us at the beautiful
campground at Dewey Bridge. Took a “bath” in the CO river, which was very much deserved. Julie came to visit me from Grand Junction. Legs are painful, but I’m
looking foward to the beautiful views tomorrow. After 42ish miles, it will be only a marathon home (of course with a rest day in between). Thank you to the whole Gemini
Adventures staff & the medical team!

THERESA: I’m looking forward to tomorrow. It should be quite the adventure. It’s fun to know we’re halfway done. Also, burritos. I’m always going to be in it for the food.

ULLA WESTERMANN: Great day today! “Short run” in the morning, then hanging out in camp, taking care of blisters, cooling off by the river. Tomorrow is the long stage!

CHRIS WARD: Day three was my favorite so far. Maybe it was the hours spent laying on a tarp under the cottonwood tree or possibly it was the massive amount of food that we all consumed.
This race is so unbelievably memorable and is the adventure of a lifetime. I have an excited nervousness about the long expedition day tomorrow but I know that at the end of the day
we will all leave with a new view on what we are capable of. Linz, Millie, Harper, and Zoe I love you all very much. Dillon I’ll be running with you tomorrow my love.

Laurie Miller: Three days of unbelievable miles. Beautiful country and an incredible race! Tyler I miss you so much !!! Wendy thank you for all the support!! Tomorrow is the big day! High mileage, heat and elevation. Here’s to adventure!!!!!!